The 2022 Gemuetlichkeit Days King and Queen
Corby and Bethany Stallman 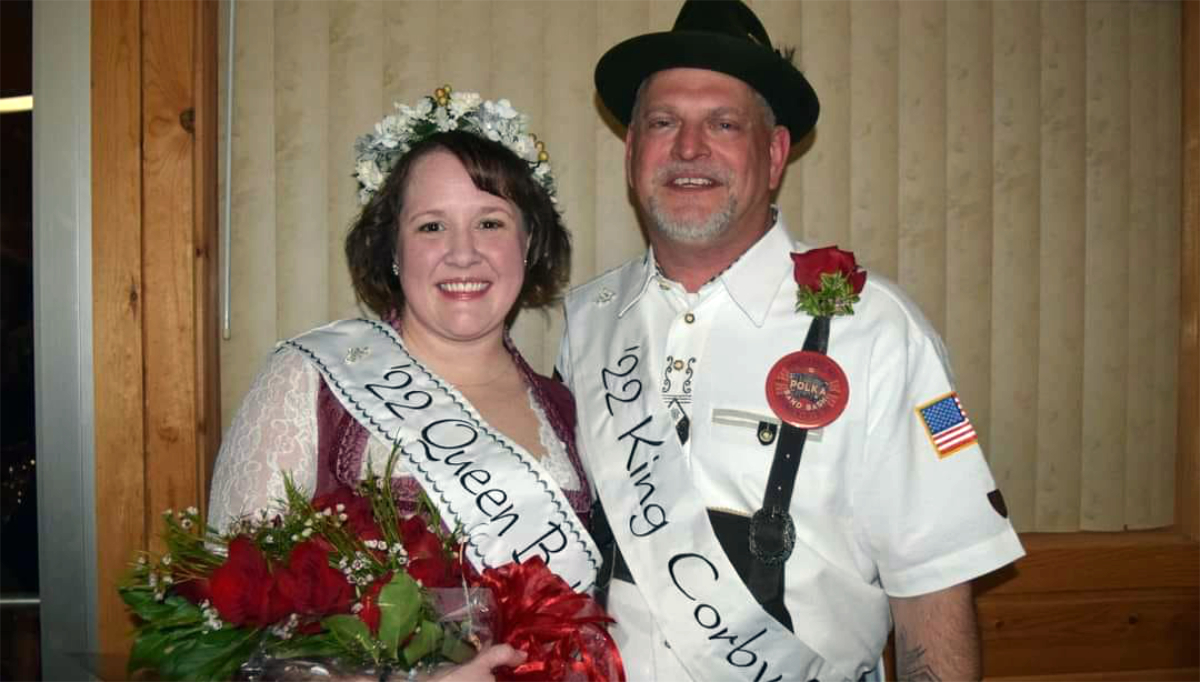 The 2022 Gemuetlichkeit King and Queen are Corby and Bethany Stallman.

Corby is the son of the late Jack Stallman and Barb (John) Kaliebe of Watertown. He grew up in Watertown and is a proud graduate of the Lakeside Lutheran Class of 1992 in Lake Mills. He is currently a journeyman toolmaker and has been employed at Doosan Bobcat in Johnson Creek for the past 22 years.

Bethany is the daughter of David (Jan) Hoppe of Watertown and Diane (Ron) Stuebs of Jackson. She also grew up in Watertown and is a 1998 graduate of Watertown High School. Bethany attended MATC and UW-Whitewater and graduated with a business management degree. She is currently the gift shop manager at The Fireside Dinner Theatre and has been employed there for the past 10 years.

The royal couple met on a blind date in 2002 and was later married at St. Mark’s Lutheran Church in Watertown, in October of 2005. A few short months later, in April of 2006 they moved to Jefferson, where they fell in love with the quiet, sweet, small town. They are blessed with two now grown children; Cheyenne (Brady) Swanson of Whitewater and Johnathan (Alex) Stallman of Janesville. They also welcomed their first grandson, Jameson (son of Cheyenne and Brady) who is almost one year old.

Outside of work, the royal couple enjoys spending time with family and friends either watching sporting events, attending music events or grilling out some good Wisconsin brats and burgers. Typically, “Adventures” are regularly made to a variety of Wisconsin breweries and wineries. They also spend a great amount of time spoiling their adorable goldendoodle, Leia.

Corby’s German Heritage can be traced back on his paternal side to 1845 when Ludwig “Louis” Stallmann (2 n’s) arrived from Hanover, Germany to Watertown and opened a grocery store. From that point on, many generations would be involved with another popular business; Stallman Cheese Store. Corby’s great-grandfather, G.A. Stallmann founded Farmer’s Cheese in 1913. Three generations continued on with the business until its closure in 1990. They were best known for their “Bon Brie” label and it was sold all around the country and the world.

Bethany’s German heritage can be traced back on her maternal grandparent’s side to 1845 when Christian Uttech arrived from the Rheinland-Pfalz region in Germany to the Lebanon area during the Old Lutheran Emigration of the 19th Century. There purchased farm land and farmed for many generations. Her German paternal ancestors also took up farming in the Richwood area at the same time. Both are small townships of Watertown. Additional Swiss and Irish roots have also proven that hard and dedicated work is the most fulfilling.

The Stallman’s would like to thank Brady & Tonya Umbarger (’18), Jeff & Tiffany Schmidt (’19), and Jeff & Debbie Hans (’21) for their guidance, support, and friendship during this amazing experience. The entire Gemuetlichkeit organization holds a special place in their hearts. Let’s get ready for a fantastic Polka Band Bash! Prost!

Please print this form and use it to submit your choice for the 2023 royal couple.
The only requirement is that the couple lives in the Jefferson School District.

Nominations must be received by January 31, 2023

The 2023 King and Queen will be officially announced at the May Ball on Saturday, May 13th, 2023 at Fairview Sports Bar and Grill. Please attend this event to see if your nominees have been selected and to welcome our new royalty. Please download and send the nomination to: